It’s International Women’s Day today, and I wrote an article about it for The List which is just slightly absurd because the brief was to choose inspirational women from all of human history and to get it in under 600 words. There’s also a completely bizarre non-sequitur of a comment, which appears to refer to a totally different article, I have no idea what.

So instead, here is a self-portrait of one of my favourite painters, Artemisia Gentileschi, entitled ‘Self-Portrait as the Allegory of Painting’, and rightly so. 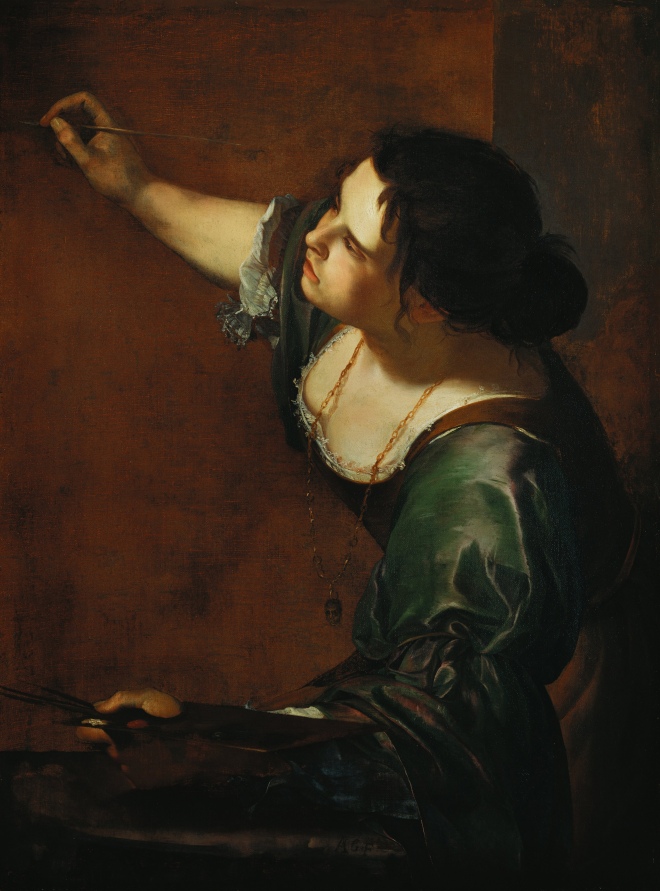 Gentileschi was a very fine painter in the Caravaggio school. I won’t go into her extraordinary life story because her work should speak for itself. Look her up. I know that this is a blog meant to be about performance, but this painting is itself a performance, and an extremely gutsy one at that.

Look at that necklace. If you’re looking at it and wondering ‘Is that a fucking human head necklace she’s wearing?’ then I can tell you that, yes it is. Here’s a blow-up of the original image to prove it:

Artemisia Gentileschi in your face!

My dad, Jeremy Johnston, was a singular person in many ways. I’m not claiming any special virtue for him. Those who knew him best, meaning my mother, my brother and myself, would be the first to say that Jerry Johnston was not the most virtuous guy ever. It didn’t make that much difference that he converted to Lutheranism in the 1970s, dragging the rest of us (not unwillingly) with him, and steeped himself in enough Lutheran theology to earn the right to step up to the pulpit in our church one Sunday in every month, being the only time in most of my churchgoing life that the service was in a language I actually understood. Jerry developed a theology based on the notion that justification came from faith alone, which conveniently excused him from doing anything he didn’t want to do. I ended up doing an extended routine about it in a show I wrote and performed, years later.

Jerry died in November 1996, when I’d just turned 26 and had recently learned that my first play was going to be produced by the Abbey Theatre. I don’t really know if the knowledge made him happy that the Abbey was going to produce my work, when it had once been a home to the plays of his own father, with whom he’d never had a great relationship. I think he might have been a bit jealous, but I like to think that he, who’d been to Harvard and had got a BA cum laude in English, was at least slightly pleased that he’d passed on the respect for things of the mind. My brother became an expert in certain aspects of the Napoleonic Wars. I became a writer. Sort of.

Dad’s musical tastes were very much those of his youth. He used to play Bartok and Hindemith around the house; not that I knew at the time that that’s what he was playing, because he wouldn’t tell us. He kept his tastes largely to himself, and seemed to feel no need to share them. When I wanted to get a bass guitar, he was against it, because he thought I wouldn’t bother to learn it properly. However, I didn’t know that at the time. He didn’t tell me. He told my mother instead, and it was up to her to assure him that I would take it seriously. I did take it seriously, but he never seemed to notice that I’d done so, although, to be fair, he did dutifully drive me to and from various band practices, even though he never took the slightest interest in my progression as a player, or ask me what I wanted to do with my fascination with music, or encourage me to do anything with it, or engage with that particular subject at all, on any level.

However, when Dad became a Lutheran, he started to be exposed to a slightly different grade of music. During the 70s, as Dad had to travel to Germany and Scandinavia both in the course of his job and as part of becoming more involved with the church, he became an ABBA fan.

If he did, so did we. He was the cultural authority in the house, at least until I reached my late teens and busted out (purely intellectually speaking; I didn’t manage to actually leave the house until my early 20s). And so that’s why I post this, the last and, to me, most moving because most abstract track from the first Abba record Dad brought into the house: the title track of ABBA’s 1976 album Arrival.

Something about it always makes me think of my Dad; I don’t know why, because being a basically sad-but-happy piece of music, yearning yet resolved, it’s at least superficially unlike the music I’d associate with my Dad, a man who always seemed to be uninterested in what was going on immediately around him because he constantly had his mind on something else; not necessarily something more elevated, but at any rate, something that he found more fascinating than the thing immediately to hand, no matter what it was. But maybe that’s why it reminds me of him; maybe that’s why he liked ABBA so much. Perhaps the direct and uncomplicated emotionalism of ABBA records represented something that he would have liked to have. Or maybe he just fancied Frida and Agnetha.

ABBA are one of the few links I find with my Dad, who remains as much of a mystery to me as I suspect he probably was to himself. He died almost half my life ago. I would have liked him to know that he was going to have cool grandchildren. I don’t know whether he would have agreed that they were so, but in any case, I think that they are, and that’s what should matter. I would like to give him the benefit of the doubt. But, by the same token, it would be great not to have the doubt.

In the meantime, I post this in his memory, because let’s face it, ABBA are for all seasons.

ABBA, my Dad, and death

Don’t say I never give you nothing. This 1927 recording of Louis Armstrong‘s Hot Five features a duet passage with guitarist Lonnie Johnson in which, as Gunther Schuller points out in his classic Early Jazz, Armstrong is scatting in 3/4 while Johnson is playing in 4/4; the passage in question starts at 1:40. Polymetric stuff like this is how jazz got to be an influence on people like Elliott Carter. Moreover, it’s just some fucking awesome early jazz. Enjoy.

The modernity of Louis Armstrong

The shit that Adorno talked about jazz is literally true about Led Zeppelin.

You need entry-level rock, for people who are too timorous to feel anything intensely. In the 70s it was provided by Status Quo; in the 80s, nobody provided it; in the 90s, Oasis.

As anyone who’s listened to his recordings can confirm, reports of Charlie Parker’s death have been exaggerated.

Haydn and Sterne: the originators are the greatest jokers.

The general lack of enthusiasm for Haydn goes to show that the lip-service we pay to innovation in music is nothing more than that.

Nobody likes to admit the extent to which any one period in music history exactly resembles every other.

It is high time that two things were established once and for all:

1.) The Beatles‘ pre-eminence in the history of post-WW2 popular music;
2.) The exact nature of what The Beatles were crap at.